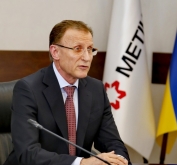 In his new position, Mr. Shevchenko will lead continued implementation of investment projects at Ilyich Iron and Steel Works, such as the reconstruction of the sinter plant and the revamp of the 1700 Hot Strip Mill, as well as construction of the modern continuous casting machine and secondary metallurgy facilities. Besides the development of the production efficiency improvement program, one of the newly appointed manager’s key tasks is to fulfill Metinvest Group’s commitments regarding the continuous improvement of the environmental situation in Mariupol.

Taras Shevchenko has 40 years’ experience in the industry and holds the Merited Metallurgist of Ukraine award. He was born in 1954 in Novosyolovka village in Dnepropetrovsk region. He graduated from Dnepropetrovsk Industrial College in 1977 (with a degree in Electrical Engineering) and Dnepropetrovsk Metallurgical Institute in 1983 (with a degree in Metal Working Process). He started his career at Dnepropetrovsk Iron and Steel Works named after Petrovskiy, holding various positions from the assistant mill operator to the chief engineer and the first deputy general director. From 2000 to 2002, he worked as chief engineer at Alchevsk Iron and Steel Works (Alchevsk, Lugansk region). In 2002, he was appointed General Director of the plant. In 2007, Mr. Shevchenko received the Hero of Ukraine award in recognition of his significant contribution to the development of the steel industry

Yuriy Zinchenko who has led Ilyich Iron and Steel Works of Mariupol since 2012 will develop the new strategic area at Metinvest Group, where he will hold the position of the Technical Service Director of the Operations Directorate.

- Yuriy Zinchenko led the enterprise through the most challenging and distressing times in the industry and in the country. He nevertheless succeeded in keeping the plant running and made the production cleaner, more efficient and modern. Today, his knowledge and experience are required by Metinvest to improve our competitiveness in external markets. The new General Director, Mr. Shevchenko, has proven to be an outstanding professional whose name is well-known in the industry. I am sure that his vast experience with the execution of large-scale modernization programs and the anti-crisis management will facilitate dynamic development of Ilyich Iron and Steel Works of Mariupol and its sustainable leadership in the industry.