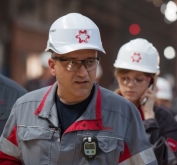 Since 2013, Metinvest Group’s Ilyich Iron and Steel Works of Mariupol (MMKI) has reduced natural gas consumption by 69 million cubic meters or by 40% if recalculated per tonne of steel. Yuriy Zinchenko, the General Director of MMKI stated this at SEF-2016 KYIV 8th International Forum and Exhibition on Sustainable Energy in Ukraine.

Also, Yuriy Zinchenko informed that since 2013, exclusively by implementing ISO 50001-based Energy Management System and the Continuous Improvement Culture, MMKI not only reduced the consumption of natural gas, but also electricity: by 46 million kWt/h. Thanks to this, the enterprise saved over UAH 500 million.

This saving, according to Yuriy Zinchenko, is an important achievement, as the only way to retain competitive ability of Ukrainian products in the world markets is to reduce production cost and logistical expenses, and the Ukrainian steel makers are putting out considerable effort to achieve this goal. However, improvement of competitive ability of mining and metals products in the world markets is hampered by ill-considered policy of the state. Indeed, in Ukraine there are the highest tariffs in the world, and continuously growing railway tariffs (in 2015 the fare rose by 30%, and by another 15% in 2016).

“Steel making is one of the most energy intensive sectors of Ukrainian economy. Through modernization and complex energy saving measures, Metinvest has been actively reducing energy resource consumption at its production facilities. For example, during four years, MMKI managed to achieve a significant reduction in natural gas consumption at all business units. As a result, already today, we use 102 cubic meters of fuel per tonne of steel, which is by 40% less than in 2013. At the same time, we are saving significantly on the gas transportation tariffs, which are among the highest in the world in Ukraine”, stated the enterprise director.