Geoffrey R. Pyatt, the United States Ambassador to Ukraine: Metinvest is the example of extraordinary resilience of Ukrainian people 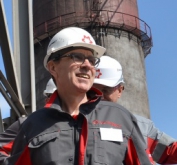 Yuriy Zinchenko informed that the Sinter Plant Reconstruction was the largest environmental project in the history of independent Ukraine. As of today's date, major overhaul of two sinter machines completed with installation of modern gas cleaning equipment. In 2017, Metinvest plans to build a desulphurization system and install bag filters on the first building of the Sinter Plant. After the reconstruction, the Sinter Plant will meet the best European and international emission standards – max 30 mg/m3.

The General Director added that this project was one of the top priorities for Metinvest Group, which continued stable financing of the project despite the acute situation in the region and the world crisis in the industry. The total sum of USD 220 million will be invested in the reconstruction during five years.

Metinvest’s top executives also informed Mr. Pyatt that even in such challenging times for the industry and the country’s economy the Group found possibilities to support the cities, welfare of which depended upon major employers. Since 2010, Metinvest’s social investments in development of the major cities of its presence totaled UAH 450 million. Last year alone, Metinvest channeled UAH 90 million in social projects of Mariupol.

In his turn, Mr. Geoffrey R. Pyatt noted that he was impressed by that fact that despite such challenging circumstances, life of Mariupol residents went as normal. He noted the role of Metinvest Group in establishing peace in the city and appreciated the great contribution of the Group’s enterprises in social and economic development of Mariupol.

“Metinvest is one of the largest import and export player in the trade relations with the U.S.A. We are very interested that this partnership grows and develops in the future. We were very impressed by the investments made by the company in its environmental projects in spite of everything. Metinvest is the example of extraordinary resilience of Ukrainian people.

“The last two years were the most challenging for our company. However, Metinvest Group continues to modernize its production facilities. During this period, the sum of investment in the development of the production facilities totaled UAH 13.3 billion. We did not halt our social projects, and continued improving the environment in the cities of our presence. We are pleased that our efforts were appreciated by representatives of the international community in the person of the United States Ambassador to Ukraine, Mr. Geoffrey R. Pyatt”