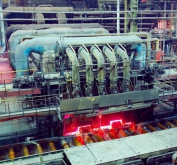 PJSC “Ilyich Iron and Steel Works of Mariupol” in 2014 during 6 months reduced the costs on the energy resources purchasing on 5.83 million dollars. The implementation of the complex program connected with energy saving measures allowed the enterprise sufficiently reduce the consumption of natural gas during half year.

A number of important energy saving measures aimed at production energy intensity reducing have been implemented at metallurgical plant. At blast-furnace shop due to selection of air heaters optimal work it was managed to reduce the consumption of natural gas on 8.2 million cubic meters to the amount of 3.7 million dollars.

In rolling shop “3000” due to the reduction of the heating furnaces bottom beams working life the consumption of natural gas has been reduced on 2.4 million cubic meters to the amount of 1 million dollars. The activation of additional burner devices on the two boilers of Heat-power plant-1 allowed reducing the consumption of natural gas in mixture on 558 thousand cubic meters that is equivalent to the sum of 257 thousand dollars.

- The high price of natural gas influences directly on the cost-price of our production. The customers of our enterprise want to buy a high quality metal at competitive price. That’s why we fully solve the questions connected with the reduction of power intensity of the enterprise influencing the cost of our production. Metallurgical enterprises of Metinvest Company sufficiently reduced the dependence from natural gas price. Thus, pulverized-coal injection units are already operating at Ilyich plant and “Zaporozhsteel”, EMZ and Azovsteel will also replace gas on pulverized coal fuel in blast-furnace production. Our example proves once more that only modernization and energy saving will provide us stable positions at the worlds markets.

Further information is available via the web site www.metinvestholding.com