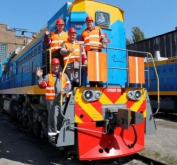 Three modern diesel locomotives arrived to the rail depot of Ilyich Iron and Steel Works, Metinvest group. The machines will go on rails as soon the precommissioning is complete.

New TEM-18D locomotives are equipped with modern diesel engines , they have on board power supply and microprocessor control and diagnostics systems. The space operator’s cab is equipped with air conditioning and heating system. Such accessory secures low fuel consumption , user-friendly operation and maintenance.

All diesel locomotives have been purchased according to the hauling equipment refreshment and modernization investment program for 2014. The cost of each unit is around 14 mln.hryvna.
During 7 month of the current year around 100 mln hryvna have been spent by the company for re-equipment and repair of existing auto- park.

According to the investment program , two diesel locomotives will be subject to capital repair which costs 18 mln.hryvna. Moreover, two M62UP diesel locomotives have been repaired and modernized and the other two are being repaired.

- Investments in modernization are investments in the plant’s future. The existing program of modernization will allow us to resolve three main tasks which include increase of production capacity, lower resource consumption and reduced stress on environment.
Renovation of the hauling equipment is a vital part of this program. The new equipment will bring more economy in the plant’s railway logistics .

METINVEST HOLDING LLC is the managing company of METINVEST GROUP