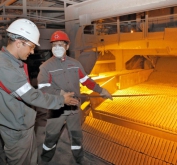 PJSC “Ilyich Iron and Steel Works of Mariupol” of Metinvest Group is proceeding with repairing the equipment at sinter factory and improving the systems of ecological security of the department. The sixth unit has been repaired along with agglomachine №12. The investments of the enterprise made up 20 million ghrivnas.

About 600 specialists took part in the capital overhaul. Due to well organized work the specialists managed to renovate machine during only 20 days. At the same time a year earlier such amount of work was done during one month.

There has been made a large-scale repair of the nature conservation equipment. Gas paths and 800 elements of cyclone cell system which clean waste gasses from harmful substances have been fully replaced. The reparation of the grate field will also allow sufficiently reduce the emissions into environment.

The reconstruction of the control panel and its automation has been done. Now the technological process of agglomerate baking is carried out with computers. The installation of modern burners on ignition furnace will reduce the consumption of natural gas on 10%.

The general director of PJSC “Ilyich Iron and Steel Works of Mariupol” Yurii Zinchenko:
- We have planned a very active repair campaign at sinter factory which we haven’t made for a long time. In May we renovated agglomachine №12, now the sixth one, and in Autumn I hope we will rebuild the tenth agglomachine. During these three repairs we concentrate on ecology: we make the reparation and when it is necessary we make a total replacement and modernization of gas cleaning systems. Second task – make agglomachines more power efficient, reduce the consumption of energy resources. And a third task – modernize technological process, implement new computer control systems.

METINVEST HOLDING LLC is the managing company of METINVEST GROUP