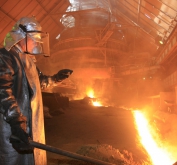 PJSC “Ilyich Iron and Steel Works of Mariupol” carried out the blowing of the blat-furnace № 5 without natural gas for the first time in the history of the enterprise. Thus, metallurgical plant has opened a perspective of full refusal from using expensive energy carrier in blast-furnace production.

The blowing of the most powerful at the plant fifth furnace was carried out during 6 days to stabilize the unit work after capital overhaul. In May during repair works the specialists carried out the preparation for the experiment: evaluated probable risks connected with the refusal from the blue fuel, made many changes in the working regimes, renovated the blast furnace equipment.

The main point in new technology is the replacement of natural gas with pulverized-coal fuel. In 2012 at Ilyich plant an industrial operation of the unit which injects pulverized-coal (PCIU) into blast-furnaces was begun. At the expense of this project the enterprise was managed to create 250 new working places and to reduce the year gas consumption on one third (400 million cubic meters).

According to the experts’ opinion, besides economic rates the capital overhaul of the blast-furnace №5 will positively affect the improvement of Mariupol ecology at the expense of replacement and modernization of cleaning equipment.

The general manager of PJSC “Ilyich Iron and Steel Works of Mariupol” Yuriy Zinchenko:
- During the years of Ukraine independence the prices for imported natural gas has risen tenfold. And each rising is a hit on our competitiveness. The way out of this situation can be only one – modernization and introduction of energy saving technologies. With the start of Pulverized-coal injection unit we have made a dash in this direction and with each year we are proceeding to reduce the dependence from excessively expensive gas. This is a contribution in the nonvolatility of Ukraine.

РJSC «Ilyich Iron and Steel Works of Mariupol» is one of the greatest enterprises in Ukraine with full metallurgical cycle. The Works produces pipes and flat rolled products of carbon, low-alloy and alloy steels for different applications: hot-rolled plates and sheets intended for the production of pipes for main pipelines, ships, pressure vessels, bridge constructions, other metal constructions for critical application; hot-rolled plates, sheets and strips including pickled; cold-rolled, including galvanized, bands, sheets and strips, including for cold stamping, flooring and others.