A sports ground for school from Metinvest 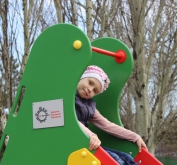 Metinvest company has made another endowment to children with a new adventure playground in Staryi Krym settlement. Last year, the team of teachers of school №46 won the social program contest “The town – by our hands” and they were granted 50 000 hryvna assigned for development of a new playground for local kids.

No play areas, similar to the new one, have been built on the settlement’s territory before. Therefore, an idea has appeared to built a playground for children so they could spent their leisure time actively, participating in the sports.

The teachers say a playground has been their a long-time wish. The playground is provided with all equipment which make children’s leisure times effective and fun: a teeter, wall bars, a slide and a carousel. The parents are thankful that their kids will have a place for recreation during summer holidays - the biggest school camp in Mariupol “Rainbow of childhood” begins functioning in June.

Irina Arakelian, the Head Teacher of school № 46:
- Appearance of a modern, beautiful playground is actually an important event for everybody. We are surprised there are people who , wholeheartedly, do so many good deeds for our kids in such hard times. I know that the “The town – by our hands” contest is the initiative of mr.Rinat Akhmetov. I wish him to know that the playground, presented by Metinvest company, is the favorite holiday place for our kids. This year we are planning to participate in the contest as well we would like to develop the territory around the playground. We are hopeful the fortune will smile to us again and we will be the winners.

Sergej Magera, the coordinator of the public union “Green Center Metinvest” in Mariupol:
- The great benefit of the contest “The town – by our hands” is that it allows the Metinvest Group to determine priority guidelines for its social investments. The citizens decide which project is important for their town, they offer their ideas for solving problems, beautification of streets and districts. Thereby, our charitable contributions are being spent correctly and reasonably. The contest make the residents more active so the projects are kept in memory, they live on and benefit.

Mikhail Balabanov, the head of Staryi Krym settlement:
- Our relationships with the metallurgical plants exist for decades. Ilyich Steel Works provided shared sponsorship for construction of the settlement’s beautiful school. The plant was also a shared sponsor in construction of the settlement’s polyclinic, gasification and other projects. I am pleased that good traditions are being respected after Ilyich plant’s inclusion into Metinvest Group. Currently, a lot of remarkable projects are being implemented in the town by Metinvest Company with active participation from our side. I wish to thank Metinvest Company for assistance being provided to our settlement.

METINVEST is an international vertical-integrated mining-and-metallurgical Group of companies, which runs assets in every link of production chain for creation of value from iron-ore and coal mining tol semi-finished and finished metal products manufacture. The structure of the Group comprises mining and metallurgical enterprises in Ukraine, Europe and USA, and sales network covering the key world markets. METINVEST GROUP consists of Metallurgical and Mining Divisions. According to the strategical vision of the Group its aim is to become lead European vertical-integrated steel producer with stable ratio of growth and cost effectiveness in spite of market cyclicity, and to ensure investment return higher than industrial standards. In a period of the nine months before 30th of September 2013 the Group has received US$9,8 milliards of sale proceeds, cost effectiveness by EBITDA was 18%.