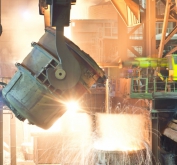 PJSC “Ilyich Iron & Steel Works” of METINVEST GROUP has reduced expenses for purchase the energy resources on 75 million UAH in 2013. Reduction of energy intensity of production is the result of integrated program realized at the.

Among the main achievements of the enterprise for the last year is the implementation of the energy management system in accordance with International Standard ISO 50001:2011. This innovation allows reducing energy consumption systematically and regulates the measures implementation aimed at the decrease of production harmful effect for environment.

Shop commissions on the energy saving are established and in successful operation at “Ilyich Iron and Steel Works” for the purpose of production energy efficiency increase. The main task of these commissions is detection and prevention of fuel and energy resources losses.

“Scientific progress and the implementation of modern technologies open new opportunities of the metallurgists, among which is the decrease in the production energy-output ratio. And we intend to use them maximally for the production efficiency increase. The cost of the natural gas and electric energy are the determinative factors of our production cost price. Today “Ilyich Iron and Steel Works” pays intent attention to the modernization of the production facilities and implementation of the progressive energy saving developments and initiatives,” – noted Yurij Zinchenko, the General Director of PJSC “Ilyich Iron and Steel Works of Mariupol”.

METINVEST is an international vertical-integrated mining-and-metallurgical Group of companies, which runs assets in every link of production chain for creation of value from iron-ore and coal mining tol semi-finished and finished metal products manufacture. The structure of the Group comprises mining and metallurgical enterprises in Ukraine, Europe and USA, and sales network covering the key world markets. METINVEST GROUP consists of Metallurgical and Mining Divisions. According to the strategical vision of the Group its aim is to become lead European vertical-integrated steel producer with stable ratio of growth and cost effectiveness in spite of market cyclicity, and to ensure investment return higher than industrial standards. In a period of the nine months before 30th of September 2013 the Group has received US$9,8 milliards of sale proceeds, cost effectiveness by EBITDA was 18%.