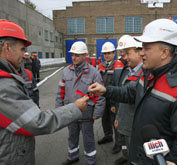 Railway fleet of Ilyich Iron and Steel Works of Mariupol, Metinvest Group, has been enlarged with two new shunting locomotives TEM-18 DM. The company invested about 24 mln UAH into the modern equipment purchase.

New locomotives became a present to railway shop on their professional holiday, November 4.

Locomotives made by Bryanskiy diesel locomotive plant are equipped with microprocessor control system and low-consumption engine which allows to substantially reduce diesel fuel consumption under conditions of increased cargo traffic.

In May, after numerous addresses from Mariupol inhabitants and local authorities, Metinvest refused from use of trucks for cargo transportation to commercial port and transferred cargo flows (about 200 ths tones per month) to railway with the purpose of municipal roads preservation. Also, after Azovstal sinter plant shutdown volume of sinter and ore and slime mixture movements between two works increased.

For uninterrupted operation of railway shop Ilyich Iron and Steel Works only intends to invest 50 mln. hrn. into renewal of locomotive fleet before the end of 2013. 25 mln. hrn. out of them are intended for capital repair of nine diesel locomotives. It is also intended to invest another 50 mln. hrn. into purchase of three new locomotives and repair campaign continuation. This is a sequential program for 2014.

“Successful operation of the whole company depends on efficient and well-coordinated work of railway department. The railway network of our company, if compared with a human body, presents its most critical arteries. We will make all our efforts to completely renew rolling stock of railway shop in several years,” states Yuriy Zinchenko, Director General of PJSC “Ilyich Iron and Steel Works of Mariupol”.