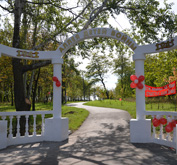 Alley of War Children was inaugurated in Mariupol within the framework of realization of the corporate social competition organized by Metinvest Group “City with our hands”. Company’s investment to realization of this project amounted to UAH 180 ths.

Social organization “War children protection” initiated this project. In 2008 in Primorskiy Park was established the Alley of War Children. MMKI gave support in asphalting and territory improvement. For these purposes the Works diverted a sum of UAH 130 ths. In 2012 social organization workers won the competition “City with our hands” organized by Metinvest Group and got a grant of more than UAH 50 ths. Honorary arc appeared in Primorskiy Park and 200 young trees were planted along the Alley.

Recreational area improvement will be continued soon. Social organization “War children protection” won again the competition organized by Metinvest Group. Owing to the financing of the social project on the Alley of War Children will be mounted new benches.

Social program “City with our hands” aims to develop local population active position and gives to the citizens of Mariupol a possibility to realize their ideas, targeted to the creation of comfortable conditions and life quality improvement.

METINVEST is an international vertical-integrated mining-and-metallurgical Group of companies, which runs assets in every link of production chain from iron-ore and coal mining till semi-finished and finished metal products manufacture. The structure of the Group comprises mining and metallurgical enterprises in Ukraine, Europe and USA, and sales network covering the key world markets.

METINVEST GROUP consists of Metallurgical and Mining Divisions. According to the strategical vision of the Group its aim is to become lead European vertical-integrated steel producer with stable ratio of growth and cost effectiveness in spite of market cyclicity, and to ensure investment return higher than industrial standards. In the first half of 2012 the Group has received US$6,74 milliards of sale proceeds, cost effectiveness by EBITDA was 16%.