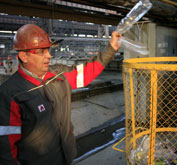 At PJSC «Ilyich Iron and Steel Works of Mariupol» which is inside Metinvest Group a centralized polyethylene bottle collection system has began its operation. The initiators of the project on the introduction at the Works of the best practice on separate collection of hard consumer waste and increase of ecological culture were the workers of the Works.

The first example was shown by the workers of Plate Rolling Mill 3000 – a trial project on empty plastic bottle collection, in which the workers get drinking water, has been started. For each worker there are at least one 1,5-liter bottle of water every day. Empty bottles have not only accumulated, but also endangered environment. Scientists have proved the danger of plastic for ecology – its full period of decomposition is 300 years.

Since August, the project on plastic bottle collection is realized Works-wide. At PJSC «Ilyich Iron and Steel Works of Mariupol» a centralized receiving point for plastic bottles has been organized where bottle plastic preliminary collected in all shops and departments is weighed and shipped. The Works has made a contract with a specialized organization «Green Company», which will remove and utilize polyethylene tare.

«Actions taken touch three aspects: ecological, economical and aesthetic. The Works provides the workers with drinking water of improved quality. In hot weather, the workers are given about 1,000 bottles of water per day. Selling them as a utility waste, we not only solve in part the question of environmental protection, but also get money for the utilized plastic bottles. Not a lot of money, but this is our contribution to the Work`s economy, - underlined Aleksandr Smotrov, the Deputy of Chief Engineer on Environmental Protection of PJSC «Ilyich Iron and Steel Works of Mariupol».