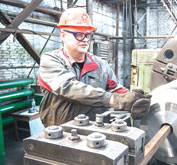 In Mariupol on the basis of repair assets of the Chief Mechanic Department of PJSC «Ilyich Iron and Steel Works of Mariupol» and the Repair and Engineering Department of PJSC «Azovsteel» a new enterprise has been established – Mechanical Repair Works (MRW) that is inside the Metinvest Group. In connection with the formation of the enterprise an organizational structure of metallurgical Works` departments has been reviewed - the highlight in the realization of the project on the organization of MRW is preservation of jobs, wages and privileges given to workers.

According to the plan Mechanical Repair Works will come into operation at full capacity in January 2014 as technologies develop and equipment, accessories and staff completes. At this stage repair bays ensuring the continuity of the basic production and which are economically unpractical to transfer to MRW will remain at metallurgical Works.

High-grade repair services are necessary for all Metinvest enterprises. But the specialists’ analysis has shown that each of the enterprises having a number of own capacities on spare parts production can’t work in such a isolated condition more effectively than this is required by manufacturing situation. That’s why it was planned to create a specialized works on the basis of the best repair capacities.

The new enterprise will accomplish the orders of all metallurgical enterprises that are inside the Metinvest Group, but not only the orders of PJSC «Ilyich Iron and Steel Works of Mariupol» and Repair and Engineering department of «Azovsteel», where the shops of Mechanical Repair Works are situated directly. As a result the quality of labor planning and organization will increase and as a consequence the quality of rendering of repair services in whole will increase too.

For strengthening the production facilities of the formed Works it is planned to invest over 24 million ghrivnas.

«A single control system will allow minimizing all the costs connected with production process. The aim of reorganization – increase in quality of repair works organization, creation of clear system of repair works controlling. Besides the task has been set to increase the prestige of such a profession as repairman, transfer it to the category of basic but not auxiliary production», - marked the chief of intercommunication control department of PJSC «Ilyich Iron and Steel Works of Mariupol» Olga Bashkirova.

«It will be an effectively acting Works on the production of integral implements spare parts for all the enterprises within the metallurgical division of Metinvest Holding. Today approximately half of spare parts are purchased from off-site organizations taking into account the fact that most of that we can produce by ourselves with high quality, competitively and effectively.

The new plant has guaranteed sufficient market outlets for its services and confidence in the ability to cope with them because of the availability of capacities and qualified personnel that can accomplish assigned tasks qualitatively and in time» - commented the event the General Director of Mechanical Repair Works Aleksey Belyaev.