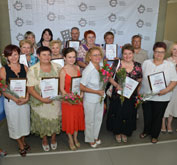 On the 8th of July the winners of the social projects contest on corporate social programme “City by our hands” were declared. This year the Council of contest experts examined more than 60 applications from the citizens, social institutions and local authorities and selected 15 best projects, which is three times more than the last year. The contest prize money fund was increased from 500 up to 700 ths. UAH.

Among  the Contest winners  is project of the  3-d age University computerization within the regional center of  social service in Iliychevskiy District. In this center with the new computer equipment the people of the older age can  adapt to the conditions of modern life and always be in connection with  their  relatives. The contest will contribute to the development of sport among the youth. A number of projects are aimed to create  the special areas for sport and playing where children will be able to spend their free time with benefit. The substantial part is aimed at environment improvement and planting of greenery  in parks and recreation areas.

Due to one more project the multisensory center for preschoolers will be created in the city. The center will include herbal therapy, phototherapy and gym. At the center the expert teachers will develop in children  sensory perception and cognition along with psychological  consultation and training, and create the necessary conditions for the physical growth and development of the preschoolers. Which is especially important  for the children with the arrested development which will attend the center.

The project “ City by our hands”  started in 2012 at the cities of Metinvest  presence: in Donetsk, Dnepropetrovsk and Lugansk regions. In Mariupol the  projects financing and implementation control is performed by  the Works “Ilyich Iron and Steel Works” and “ Azovstal Iron and Steel Works’.

“The Contest is an example of how the citizens themselves  are eager to change their city, to improve it, to make it more clean and comfortable for life. And it is good that among the project works  there are a lot of  ones which are aimed to improve the city environment. Our task is not only to help people financially to realize their initiatives. It is important to learn to unite the efforts in order to achieve the  aim. And it is very important  to develop the personal responsibility for the future of Mariupol. Probably that’s why  the contest became successful, people are glad to use the opportunity to improve something for the better”, pointed out Yuriy Zinchenko, Director General of PJSC Ilyich Iron and Steel Works during the course  of award ceremony.

During the decades the future of Mariupol was defined  by the development  of metallurgy, the life of the city and of the Works are tightly connected. Our success  is in the joint stable and harmonious development. And for that purpose it is important  to have a dialogue and to  listen each other. From year to year the two Works help the city to solve the burning problems, like beach preparation for the disabled ones, assistance  in the repair of medical facilities or in any other social questions, we try to provide the maximum support . The Contest “City by our hands” is intended not only to solve the problems. It allows the citizens of Mariupol   to implement in life their vision of how the city is to develop. And we appreciate it a lot –the opportunity  to make Mariupol better together –underlined Enver Tskitishvili, Director General of PJSC “Azovstal Iron and Steel Works”.

« Last year  due to the Contest “City by our hands” at the Leporskogo park  the  playground and the sport center were built, the improvement of Mariupol continued, and also  the Alley of the war children was created in the city.  This year the number of ideas from  citizens  dramatically increased

and the  two Works are ready to increase the financing in order to implement in life the ideas of the citizens. We thank the Director General of METINVEST HOLDING Igor Syry for the great present for our city. From that moment  the start to a  new contest is given which will be conducted in 2014”,- underlined the mayor of Mariupol Yuriy Khotlybey.