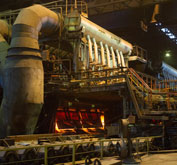 At “PJSC Ilyich Iron and Steel Works of Mariupol” of Metinvest Group within the production modernization and technical re-equipment program a general renovation of slabbing-1150 and sheet-rolling mill -1700 equipment has been carried-out. The investments made up about 13, 3 mln. ghrivnas.

An overhaul was performed by means of the rebuild service of the Works without involvement off-site contracting organizations. The control of the work and the usage of materials was held by the specialists of a recently formed engineering supervision and diagnostics direction of the Works. All the works were completed ahead of schedule.

At slabbing – 1150 the openings of horizontal and vertical stands of the mill have been restored. A replacement of battens, a repair of clipping conveyor and a drive unit of shears gear system has been accomplished. The battens of working roughing group of stands have been reconstructed, main driving gears of stands № 5, 6, 9 have been repaired, pipings of the hydraulic system and the rollers of the collecting roller table have been partially replaced at the area of sheet rolling mill – 1700. Welding deposition and mechanical treatment of the first stand’s bed has been performed and the basement of the main gear with the replacement of the pinion stand has been rebuilt for the first time of shop existence.

“In spite of difficult economic situation Ilyich plant continues the technical re-equipment. A qualitative performed overhaul in sheet rolling mill – 1700 will allow us to increase the reliability of equipment work and also at the expense of expensive roll bearings – underlined the general director of PJSC  Ilyich Iron and Steel Works” Uriy Zinchenko. – We shorten expenses and maximum enable internal reserves. Reduction of rolling cost-price and the improvement of its quality – these are our competitive advantages.

In the capacity of confirmation of the high quality of the produced products we can provide you with 50 certificates of quality given by seven international certification centers for more than 200 grades of steel, and also Ukrainian certification authorities for various production.

At the PJSC «ILYICH IRON & STEEL WORKS» operates the system of the quality control, developed and certified according to the norms of ISO 9001.

METINVEST GROUP is a vertically integrated steel and mining group of companies that manages every link of the value chain, from mining and processing iron ore and coal to making and selling semi-finished and finished steel products. It comprises steel and mining production facilities located in Ukraine, Europe and the US, as well as a sales network covering all key global markets. The Group is structured into two operating divisions, Metallurgical and Mining, and its strategic vision is to become the leading vertically integrated steel producer in Europe, delivering sustainable growth and profitability resilient to business cycles and providing investors with returns above the industry benchmarks.

The major shareholders of METINVEST B.V. (the holding company of Metinvest Group) are SCM Group (71.25%) and Smart-Holding (23.75%), which partner in the Company’s management.