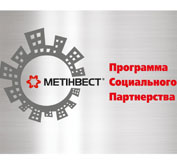 Metinvest Group announces the signing of a new social partnership agreement for 2013 between itself, Group entities Azovstal and Ilyich Iron and Steel Works of Mariupol, and the Mariupol City Council.

The parties noted a new level of cooperation and the city's increased social spending, two-thirds of which was contributed by Metinvest Group's industrial enterprises, as the key results of their 2012 agreement. The parties agreed to maintain the structure and financing of social programmes at the same level in 2013.

Mariupol ranked first in the national competition, City with the Best Development and Public Order, among cities with a population of up to 500,000. The competition was organized by the Cabinet of Ministers of Ukraine.

Despite decreased production and the difficult economic situation, Metinvest increased payroll by 5% to UAH 6.7 billion at its enterprises in Mariupol, which equalled about 40% of the municipal budget's revenue.

"The increased payroll helped the city to meet its budget targets," said Yuriy Khotlubey, Mariupol mayor. "This enabled us to hit our revenue target and finance the core areas of Mariupol's social and economic development programmes."

"This year, despite the unfavorable forecasts, we agreed to maintain the structure and financing of the social programmes at the same level," said Igor Syry, CEO of Metinvest Group. "We determined the most critical issues and high priority areas together with community and municipal officials in order to make more effective investments. We count on the support of Mariupol residents and invite them to take an active part in our programmes."

The signing of the new agreement for 2013 is evidence of Metinvest's open and proactive social policy and is a further step to strengthen cooperation between the city and Metinvest Group.